Over the last few weeks some parts of the UK have experienced horrendous weather conditions with snow, wind and blizzard-like conditions. This has resulted in an array of serious accidents; people stuck on motorways for hours on end and general mayhem on the roads. The issue of potholes on roads is also a growing problem with the local councils under major budgetary pressure and often unable to carry out much-needed repairs. So what are the rules and regulations regarding accidents on snow-covered roads or damage to your vehicle as a consequence of potholes?

The Highways Act 1980 places a legal liability on local authorities to ensure the primary roads under their control are safe to use at all times. The UK Highways Agency takes on the responsibility of keeping motorways safe and passable so, depending on the type of claim, it may be your local council or the Highways Agency that is your eventual port of call.

In order to fulfil their legal obligations, local councils and the Highways Agency use a number of methods to tackle the issue of dangerous roads. These include:

In some cases it can be very difficult to prove negligence on behalf of either the local council or the Highways Agency during abnormal weather conditions. The AA suggests that drivers should work on the basis that at least 40% of roads will be treated when snow and ice are forecast. Obviously, in circumstances where there is horrendous weather it is near possible for the relevant parties to clear every road and ensure they are all safe and passable. In legal terms the relevant authorities are only expected to “take reasonable steps to clear the roads” which is a potentially grey area that can make it a challenge to prove liability beyond all reasonable doubt.

Duty Of Care For Drivers

Recent examples of the duty of care for drivers in the UK occurred in Scotland, South West England, and Wales when  “red weather warnings” were issued. This effectively means that drivers should only undertake journeys which are unavoidable and effectively do so at their own risk. So, while the relevant highway authorities have a duty of care to ensure roads are safe and sound at all times, drivers also have a duty of care for other road users and to abide by official warnings. Any claim for injuries could be negated if it was proved that the driver in question ignored official warnings or was driving in a manner which was not suitable for the road conditions.

Where it can be proven that a road was not sufficiently gritted or cleared it may be possible to pursue a claim for injuries incurred. Once liability has been proven it is highly likely that the local council would look towards an out-of-court settlement to reduce potential legal fees. There is an indicative compensation table for different types of injuries but in reality these will vary to reflect the nature of a specific claim.

Car Damage As A Consequence Of Potholes

In years gone by pothole claims were very often waved through by the local authorities as it was cheaper to pay out on claims rather than defend them in the courts. We then saw a period during 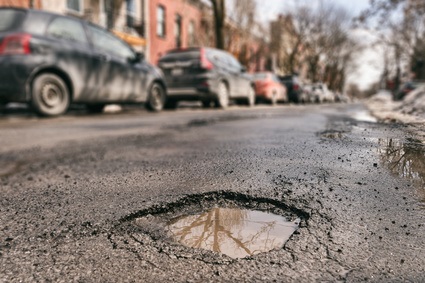 which the majority of “borderline” pothole claims were pursued through the courts as a means of making an example of those looking to play the system. Unfortunately, as the road budget for both local authorities and the Highways Agency has been slashed over recent years, there is a fear we are now moving back towards a system which will via towards paying out on pothole claims rather than defending them.

Damage as a consequence of potholes in the road can cause anything from suspension damage through to a dangerous and potentially fatal crash. The recent bout of severe weather has exacerbated the problem of potholes because the extreme variation in temperature is the core reason for the creation of these holes in the road.

What To Do When Hitting A Pothole

The AA has published a very interesting guide on what to do when hitting a pothole and pursuing a personal injury/repair compensation claim. The guide includes action such as:

Appealing against an unsuccessful claim

The size of any compensation claim in regards to a pothole repair/injury will obviously depend upon the injuries incurred and the damage to your vehicle. Unfortunately, many people fail to stake a claim for repairs or injuries incurred as a consequence of potholes because they feel the system is stacked against them. However, there are personal injury claim companies with significant experience in this area who will be able to advise you accordingly. Please contact us if you require expert advice.

In summary, either the local council of the National Highways Agency have an obligation to ensure that roads under their jurisdiction are safe. In extreme weather conditions it may be impossible to cover all roads and even those treated may still have an above average element of danger when driving. There is a degree of common sense when it comes to claims for compensation as a consequence of snow/ice covered roads and potholes, and some claims which seem extremely strong on the surface may not be successful.