There are times when the law of the land seems to differentiate from common sense. In years gone by we have seen this on numerous occasions when it comes to personal injury claims. Scenarios where there may not appear to be a claim can often involve shared liability and negligence by more than one party. We will now take a look at some of the common scenarios associated with shared liability which may surprise many.

What is shared liability?

In simple terms, shared liability is where more than one party is apportioned blame for an incident/accident. When looking at shared liability, with regards to personal injury claims, this will impact the level of compensation received by the claimant/victim. If for example a victim and defendant were deemed to be equally liable for an incident then the claimant would only receive 50% of the compensation awarded. There have been numerous personal injury claims which have involved more than two parties, often leading to different levels of apportioned liability.

Under the influence of alcohol/drugs

There are numerous occasions where individuals under the influence of alcohol/drugs have contributed to their own injuries. The problem with this type of issue is the fact that excessive alcohol/drugs can impact your body/mind in many different ways including:-

While some of these issues do occur in isolation the chances are those heavily under the influence of alcohol/drugs could actually experience all of the above in one episode. As we touched on above, it is not only the potential dangers to the individual but also the potential to impact the well-being of those around them.

Whether down at your local pub, at a nightclub or a concert, you will likely come across those who are inebriated or under the influence of various substances. In years gone by we have seen an array of shared liability compensation claims brought before the courts where the claimant has admitted reduced control as a consequence of overindulging. Some of the more common scenarios include:-

There is a general misconception that those who receive an injury when under the influence of alcohol/substances “only have themselves to blame” but this is totally untrue. If an individual was to slip, trip or fall as a consequence of a spillage which had not yet been cleared, and lacking the appropriate warning signage, the licensed premises would likely at least be held partially responsible. The physical state of the victim may well have aggravated the accident and injuries received but not necessarily been the cause.

The number of companies that regularly drug/breath test employees, especially where dangerous machinery/activities are involved, has increased dramatically over the years. This is a useful means of not only ensuring the safety of the workforce but also protecting the company from potential compensation claims in the event of injuries.

Common sense would suggest that anybody who was acting inappropriately and either directly or indirectly aggravated an accident and injuries, should have no legal recourse to any other third party. The law says otherwise and we have highlighted a number of scenarios below:- 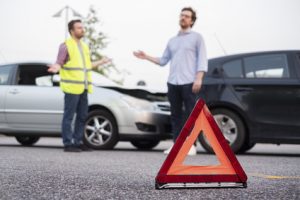 While the number of road traffic accidents in the UK has fallen in recent years, this is still the main source of personal injury claims. There are a number of scenarios where shared liability rulings have been fairly commonplace in the courts. These include:-

A number of hard-hitting safety campaigns have highlighted the potential dangers of not wearing seat belts in vehicles for both drivers and passengers. There have been many road traffic accidents which have led to life changing and sometimes terminal injuries. In the event of a road traffic accident claim where a third party is at fault, it is important to separate the actions of the third party and the individual not wearing a seatbelt. The courts will often rule on shared liability and reduce compensation because the not wearing of a seatbelt had enhanced the injuries received. Yes, the third party was responsible for the accident but not wholly responsible for the full extent of the injuries.

Over the years we have seen a number of  pedestrian accident claims from individuals who have been injured by vehicles despite the fact they have themselves been distracted and placed themselves in danger. While the law recognises the need for pedestrians to act appropriately there seems to be a greater emphasis on those in charge of vehicles. Indeed, one recent ruling involved a lady who was distracted and stepped out onto a busy road. She was hit by a bicycle with the courts suggesting that the cyclist should have “expected the unexpected”. This case is still ongoing but the cyclist is likely to be held at least partially responsible.

Local councils, private homeowners and businesses are directly responsible for the safety of pathways on their property. The general understanding is that where icy conditions are expected then the appropriate action should be taken before and after. This may involve gritting a path which is expected to be hit by bad weather and also removing dangerous ice as soon as possible. While the legal stipulation states that the pathway must be made safe as soon as reasonably possible, a number of parties have fallen foul of this requirement. However, what are the scenarios where shared liability may be considered?

It may seem bizarre but there have been numerous occasions where individuals, sometimes children, have been injured intentionally sliding on icy paths. Assuming that the local council, private homeowner or business had ample time to clear the ice, they may be held partially liable for any personal injury claim. A court of law will look at the reason for the injury, i.e. the icy path, and any mitigating circumstances, in this situation the intentional sliding. So, the courts will arrive at a compensation claim relating to the reason for the injury which would be partially reduced by the mitigating circumstances and shared liability.

As we touched on above, when pursuing a personal injury claim the court will look at two specific aspects:-

In many cases we have seen actions taken by the claimant deemed to have contributed to the extent of the injuries while not necessarily causing the accident.

We have also seen cases where more than two parties have been involved and liability has been shared, not always equally, amongst them.

The impact on compensation

The impact on compensation received by the claimant can be significant where liability is shared. In the event of a serious injury there are many different issues to take into consideration:-

This is just a selection of some of the expenses often included within an overall compensation package. It is safe to say they could add up to tens of thousands if not hundreds of thousands of pounds. Therefore, in the event that liability is apportioned equally between the claimant and the defendant this could dramatically reduce the actual payout.

We can only estimate the number of personal injury claims which are not brought forward because the victim feels at least partly responsible. There are many different issues to take into consideration when looking at personal injury claims. The initial focus is on the conditions which led to the accident and then the courts will take into account mitigating circumstances. Perceived common sense and the law are not always one and the same.