Health And Safety In The Workplace Statistics 2018/19

A recent report by the Health and Safety Executive has cast a very interesting light on the UK workplace and the number of injuries and illnesses each year. The cost to the UK economy, aside from personal injury compensation claims, runs into the billions of pounds. While it is safe to say there have been improvements in various areas of workplace health and safety this is an ongoing issue. So, let’s take a look at the facts and figures.

These figures will give you a snapshot of the physical and monetary impact from workplace injuries and illnesses. We will then dig a little deeper to show trends and further information about different areas of the report covering 2018/19.

These figures are quite staggering when you see them in print and highlight the huge cost to individuals as well as businesses and the economy. However, it is fair to say there have been significant improvements in many areas.

As you will see from the graph below, there has been some improvement in the number of work-related instances of ill-health since the turn of the century. However, you will also see that recently there has been an increase after the figures bottomed out around 2012/13. 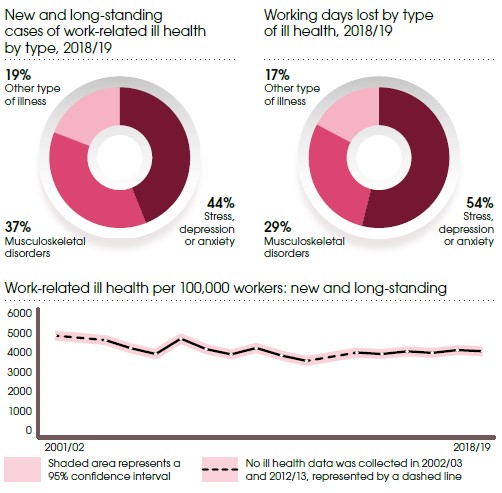 In years gone by it has tended to be musculoskeletal disorders which grabbed the headlines in the workplace but as you can see from the above graph, this is now changing to stress, depression or anxiety. Is this just a a sign of the times, a pressured workplace, companies looking for more efficiencies and many workers being pushed to the limit? Unfortunately for many business owners this can prove to be extremely expensive with regards to personal injury claims. Let’s not forget, the courts now treat mental health issues in an identical fashion to physical injuries.

While it is very easy to relate to a physical injury, the courts have become much more sympathetic towards stress, depression and anxiety. These are illnesses which take a very different form to physical injuries but can nevertheless have a huge impact upon an individual’s life. As you will see from the graph below, there has been a significant rise in instances of stress, depression and anxiety in the workplace. 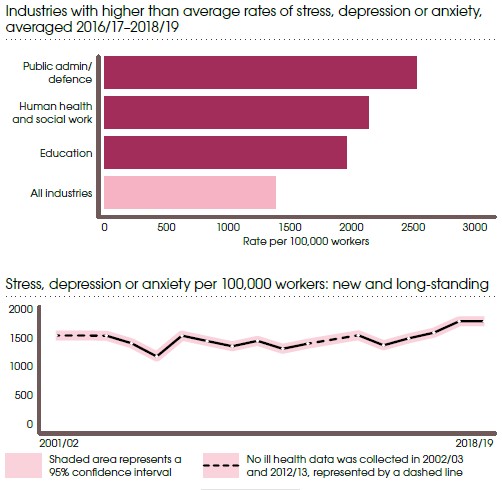 The number of cases of stress, depression and anxiety per 100,000 workers has increased of late. Whether this is a mixture of increasing instances of mental health problems and/or a more sympathetic approach to mental health and reporting, is debatable. However, it is very interesting to see that the vast majority of sectors reporting above average instances of mental health issues directly relate to public services. Was this a sign that austerity had been hitting home and a lack of investment in public services placed untold pressure on employees?

This opens employers up to potential compensation claims if they do not protect their employees, ensure they are not overworked and have access to medical assistance. While it does look as though the instances of work-related stress, depression and anxiety have peaked, we are still going through a very difficult economic time.

Musculoskeletal disorders in the workplace

Historically musculoskeletal disorders were the most common type of injury/condition experienced by the workforce. Thankfully, we have seen huge improvements over the last 20 years or so as is clearly defined in the graph below. When you consider that 6.9 million working days were lost as a consequence of work-related musculoskeletal disorders in 2018/19 this puts it into perspective. It is still a problem but compared to mental health, 12.8 million working days lost, this shows how there have been improvements in overall workplace health and safety. We can safely assume the use of safety equipment together with better training and a greater understanding of musculoskeletal disorders in general have assisted in bringing down this figure. 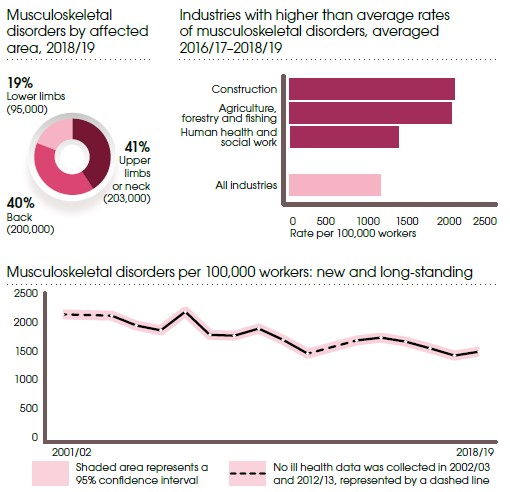 This graph seems to illustrate the long-term success in the fight against musculoskeletal disorders in the workplace. It also highlights the split between lower limbs, upper limbs and back problems which might surprise some people. What won’t surprise anyone is the fact that construction, agriculture and human health/social work are sectors experiencing higher instances of musculoskeletal disorder compared to the average across all industries.

We are still seeing reports of various lung diseases decades after the vast majority of UK mines closed for example. We have also seen major problems with asbestos-related conditions which can again take some years to develop and diagnose. At some point relatively soon we should see instances of death as a consequence of lung disease begin to fall. In some ways the rising trend is a reflection of improve medical practices and reporting procedures and does to a certain extent mask improvements made in this area. We have also seen some huge payouts when it comes to personal injury claims for asbestosis and other lung diseases because of the serious denigration in a victim’s standard of living. It will depend upon the severity of the condition but many sufferers can live for years with a seriously impacted lifestyle. 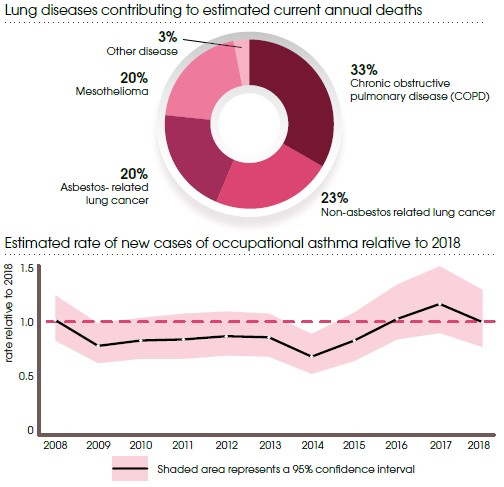 While new cases of lung disease continue to fall year-on-year (especially asbestos-related illnesses) the current figures are impacted by historic cases going back decades. The fact that the three-year time limit in which to claim compensation for injuries received in the workplace begins on the day of diagnosis has assisted many sufferers. Quite why it has taken so long for the regulations and medical practices to catch up with the huge number of sufferers has been a bone of contention for many years.

During 2018/19 a staggering 4.7 million working days were lost due to non-fatal workplace injuries. As you can see from the graph below, the figure is starting to flatline but there has been a huge improvement over the last 20 years. There is no doubt that tighter legislation has had an impact, as well as the cost of personal injury claims, but there is now more awareness by employers and employees as to their legal and moral obligations in the wider workplace. 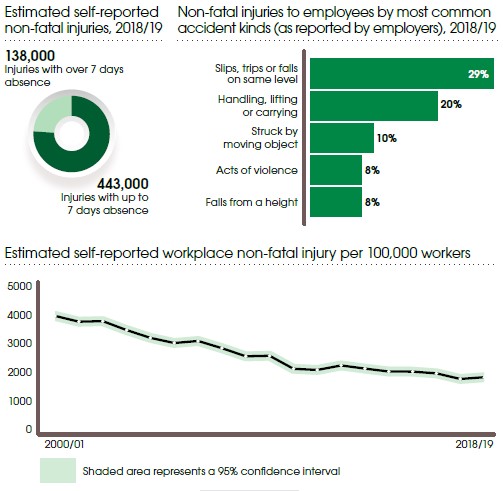 It will be no surprise to learn that slips, trips and falls still account for the vast majority of workplace injuries followed by handling, lifting and carrying injuries, those struck by moving objects, violence in the workplace and falls from a height. The vast majority (around 75%) of non-fatal injuries reported in 2018/19 resulted in absences from work of no more than seven days. 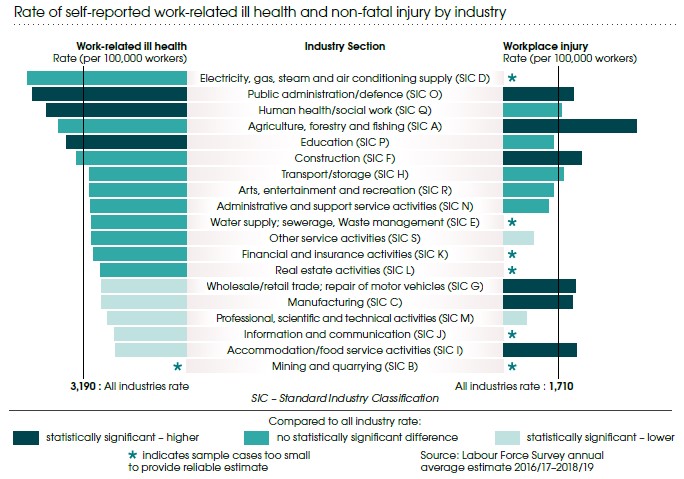 There are a number of very prominent industries which still record above average rates of illness and injuries. Agriculture is one which stands out on both measurements and due to the amount of machinery used and unpredictable nature of animals, demonstrating there is certainly more work to be done in the area of health and safety.

How does the UK compare to Europe?

You only get a real understanding of the progress made in the UK health and safety arena when you compare and contrast with European counterparts. The fact that all European counterparts are supposed to abide by the same regulations makes this comparison even more interesting. 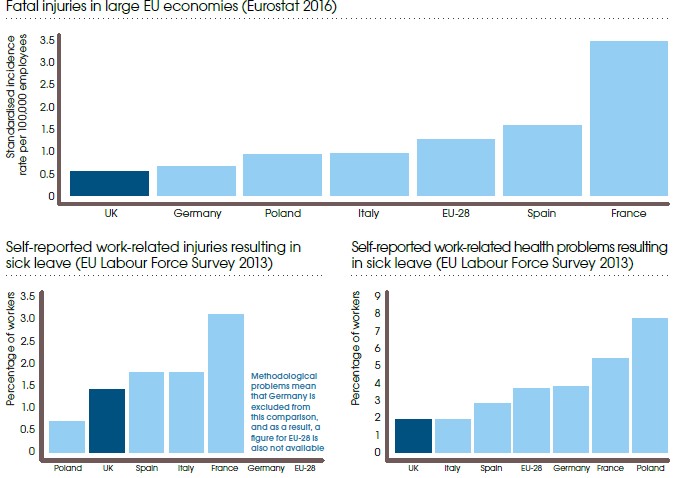 It is safe to say that the UK compares quite favourably to European counterparts across all of the above measurements. When you compare and contrast the UK and France with regards to fatal injuries in the workplace, the difference is staggering. According to data in 2016, there were six times more fatal injuries in France than there were in the UK workplace. The fact that France has a much larger farming/agriculture sector may well have something to do with this very stark difference in figures.

Improvements in training and tighter regulations across the whole UK business sector certainly appear to have had a positive impact on workplace illnesses and injuries. For many businesses the reputational damage can be greater than the monetary cost when prosecuted by the authorities and forced to pay compensation to victims. There is no doubt that these two issues alone have forced many businesses and industries to change their ways, their procedures and how they view health and safety in the workplace. A win-win for all concerned…..

While there is still work to be done with regards to health and safety in the workplace, there is no doubt that progress has been made over the last 20 years. Whether this is reflected in overall compensation payments for personal injuries is debatable because various injuries and illnesses such as lung disease can lead to significant compensation payments. As the vast majority of personal injury claims are settled out-of-court, collating figures for total personal injury claim compensation paid each year is difficult. What we do know is that the UK compares favourably to EU counterparts in terms of health and safety. But what will happen if the UK diverges from EU standards and regulations post-Brexit? Only time will tell.