It is common knowledge that local authorities in the UK are struggling with reduced budgets. If the recent statement from the AA is anything to go by it looks as though road maintenance may be suffering more than most local services. The AA estimate that drivers and insurance companies are losing around £1 million a month due to the costs of repairing damage caused by potholes is alarming. However, these figures would appear to be just the tip of the iceberg!

How Does A Pothole Develop?

We have all read about the challenge of potholes but how many of us actually know what creates a pothole? In layman’s terms, as water enters the inevitable cracks in road surfaces as they age, this will at some point freeze thereby creating larger cracks. As traffic continues to travel over the damaged surface this will disintegrate, crumble and slowly erode creating a pothole. When you bear in mind we have had two challenging winters over the last couple of years and various storms battering the UK, this is perfect weather for potholes.

To officially qualify for the term “pothole” a hole in the road must be at least 40 mm in depth – similar to the height of two 20p pieces. As one in three drivers experience pothole damage and 88% believe the UK road network is badly maintained, the likelihood is that the vast majority of us will come across potholes while driving.

The Asphalt Industry Alliance forecast (PDF)  that in excess of 40,000 miles of UK roads could be deemed dangerous/unusable by 2023. This comes at a time when the local authority funding shortfall is currently in excess of £500 million a year. While the UK government has announced an array of new road repair spending:

This is on top of the £6 billion the UK government has seemingly provided English councils to help improve the state of UK highways. The fact there is an official Department of Transport “Pothole Action Fund” says everything about the problems facing more than 24,000 miles of road. Feedback suggests that one in five roads have a major problem with potholes with the RAC also reporting a 15% rise in pothole related car damage.

The Cost To UK Drivers

The cost of repairing vehicle damage caused by potholes has been estimated at £1.7 billion per annum. There are real fears that this figure could be significantly higher with many instances of 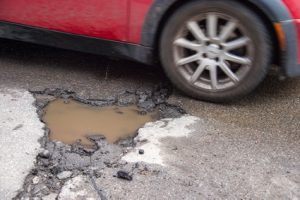 damage not being reported. Of the estimated 31 million vehicles on roads across the UK a staggering 10.5 million have required repairs as a consequence of the unacceptable condition of many UK roads. While some of the cost associated with vehicle repairs can be claimed back from the local authority in charge of the damaged roads, not all victims pursue compensation through the courts. Some may even claim through their own insurance which could prompt a rise in their premiums!

It is worth pointing out that councils across the UK filled in 2.7 million potholes in 2015 with the figure falling to 1.5 million in 2016. If the feedback from the likes of the AA and the RAC is correct then 2017 is likely to have seen a big jump and 2018 could be even worse.

How Do You Report A Pothole?

In order to report a pothole you need to know who is in charge of the road in question. If you have seen a pothole on either a motorway or an A road then you should contact the relevant highways division. The situation is different for local roads with local authorities in charge of maintaining highways and byways.

Aside from the fact that the relevant authorities cannot fix a pothole if they are not aware of the damage, this also gives them a possible “out” in the event of prosecution for damage, accidents and injuries. Under section 58 of the Highways Act 1980 councils can present a defence against prosecution relating to pothole damage on the grounds that:

This is obviously bad news if you have experienced damage or injury as a consequence of a pothole. So, if you spot a pothole in the road it is extremely important that you report it as soon as possible. This should, in theory, prompt the council to instigate a repair and if not repaired within a “sensible timescale” the council may well be liable for future damages.

How To Claim For Pothole Damage

It goes without saying that you should pull to the side of the road to check for damage if you have gone over a significant pothole. The main problem is that very often pothole damage is not immediately obvious and can actually emerge to a fuller extent weeks or even months down the line. In this scenario you may fail to connect the damage to your vehicle against a particular pothole instant some weeks previous. As a consequence, you might not pursue what could be a perfectly valid compensation claim.

Monitor Your Car For Damage

Even if no damage is immediately obvious after going over a pothole you should continue to monitor your car in the days and weeks ahead. In the aftermath you may experience a slight pull to the left or right when driving, perhaps a new vibration has emerged in your vehicle or there could be damage to fluid pipes. As soon as you feel an issue with your vehicle you should take it to your nearest garage and have it checked over. The last thing you want to do is to be stopped by the authorities driving an unsafe vehicle!

If there is immediate damage to your vehicle after going over a pothole it is imperative that you take pictures and notes of the location, time, etc. You should also take a few photos of the pothole using an object to clearly define scale if you have been injured. This would be an important piece of evidence in the event of a prosecution.

Even if you decide to pursue compensation from the local authorities you will likely need to pay upfront for any repairs to get your vehicle back on the road. In this situation it is advisable to request more than one quote to fix your vehicle and ensure any quotes are retained as evidence. It is also important that you retain receipts covering the cost of actual repairs to your vehicle which you would look to claim back from the authorities.

Lodging a successful pothole injury claim seems relatively easy in theory but in practice your case must be presented in a timely manner with as much valid evidence as possible. You may need to seek advice from a personal injury solicitor who will have a raft of experience in this particular field.

Where there is a valid claim for damages, with supporting evidence, it is highly likely that the local authorities would agree to settle out of court to reduce their costs. On occasion the case may end up in the courts and if the local authority is found liable then they will likely be instructed to pay compensation by the judge.

The nightmare scenario of reduced local authority budgets, and extreme weather conditions, over the last couple of years has had a significant impact upon the quality of UK roads. There are literally tens of thousands of miles of UK roads in danger of becoming unusable over the next few years. Some experts believe it would take well in excess of a decade to “catch up” on pothole repairs, assuming the billions of pounds of funding required is made available.

While we have covered the subject of vehicle damage caused by potholes we know from official statistics that potholes have been central to some serious injuries and even fatalities. In what has become something of a double whammy, local authorities are struggling to raise funds to fix potholes, while at the same time paying out hundreds of thousands of pounds in compensation. This issue is already out of hand and there is a real danger of getting significantly worse before it improves.