Get expert advice on sexual abuse compensation claims with a free, no obligation consultation.

No win, No fee

Free advice, no obligation
Free Consultation
– Have us call you at a convenient time –

The subject of sexual abuse by a teacher is controversial and uncomfortable for many people to comprehend. While the law comes down much harder on those who take advantage of positions of trust there are still numerous cases reported each year. It is fair to say that the government has tightened regulations and the police are more proactive but unfortunately, sexual abuse by teachers still occurs.

If you have been sexually abused by a teacher, whether on school premises or outside of school, you may be able to claim compensation.

Before we go any further it is worth noting that the definition of sexual abuse under UK law has been extended in recent years. Indeed it was only in 1991 that the government made rape/sexual assault within marriage an offence. At this moment in time the basic premise of sexual abuse is very simple, any type of unwanted sexual acts/activity where there is no consent or it is forced upon another person. There are a number of elements to this definition such as:-

In this case, we are looking at sexual abuse by teachers which will in the majority of cases involve children under the age of 16. There is also scope to prosecute where consensual activity took place over the age of 16 if it can be proven that the abuser was in a “trusted position” and took advantage of this. Each case will be considered on its own merits with regard to legal and civil prosecution.

As with the expansion of the definition of sexual abuse, the number of activities brought under this umbrella has increased dramatically in recent years. The Internet has proven to be a tool of choice for many abusers and therefore actions such as online grooming have been added to the list. The current laws cover:-

While this list is relatively broad and the offences included continue to grow it is by no means exclusive. There will be a whole range of other abuses that fall under the definition and which will be covered by law.

In this article, we are covering claiming compensation for sexual abuse by teachers in a whole range of educational facilities from preschool right up to further education facilities. The legal cover for students subjected to sexual abuse is exactly the same and further enhanced by the “position of trust” definition. In reality, sexual abuse by teachers will likely include an element of physical and psychological abuse which can have a huge impact on a victim’s mental well-being.

As you will see from the graph below, while all genders of children are equally likely to be sexually abused there seems to be a greater emphasis on males when it comes to persons in a position of trust/authority. 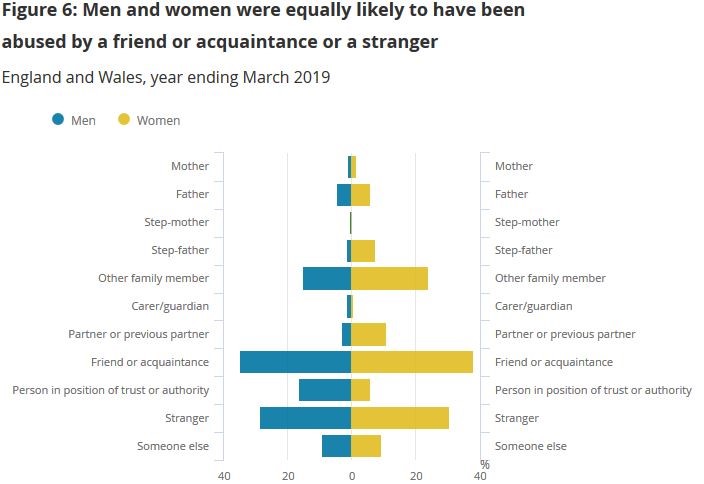 We know from research that the vast majority of cases of sexual abuse by teachers are not reported until many years if not decades down the line. It is only as individuals get older, possibly rebuilding their confidence, that they feel strong enough to report the abuse and pursue legal and civil actions.

How to report sexual abuse by a teacher

If you have been subjected to sexual abuse by a teacher it is very important that this is reported as soon as possible. There are numerous parties you can turn to with parents more often than not the first port of call. There will be some victims who are unable to broach the subject with their parents and may require the assistance of support bodies such as the NSPCC. Indeed these bodies are also available for parents of victims to guide them and support them in whatever action they decide to take.

Once a parent is aware of sexual abuse against their child by a teacher there are two actions to take immediately:-

Once the authorities are involved these investigations tend to begin extremely quickly especially when it involves children. It is also worth noting that once an education facility has been alerted to any allegations of potential abuse they must also inform the relevant authorities and follow the clearly defined protocol.

Could the school be partially liable?

Over the last few years, we have seen a significant tightening of regulations and checks with regards to all manner of individuals who work with children. This system has been in place for many years for teachers and on the whole, it works extremely well. However, sexual abusers by their very nature are secretive, manipulative, and can also use violence and intimidation against their victims to hide their abuse. However, there are a number of scenarios in which a school could be held partially liable for the sexual abuse of students by a teacher in their employ.

This very grand sounding term effectively means that employers are in theory liable for the actions of all of their employees during work time. As a consequence, it may be possible to involve the school in any compensation claim either as a separate entity or jointly with their employee.

Aside from the issue of vicarious liability, it is the legal responsibility of education facilities to protect the health and well-being of their students. If it turns out that the school was aware of sexual abuse allegations but took no action, or failed to introduce relevant procedures/safety nets to protect students, they could well be liable in the eyes of the law.

If the education facility is able to demonstrate it took the appropriate action and had the relevant protections in place then they may be able to mitigate potential liability. However this is a delicate and very controversial subject especially when involving those in trusted positions.

Gathering evidence for a prosecution

As soon as you decide to pursue a compensation claim as a consequence of sexual abuse by a teacher, you will need to gather sufficient evidence to prove your claim. Some of the more common questions asked at a relatively early stage include:-

While some of these questions may be uncomfortable to face, there is a need to build a watertight case when pursuing such prosecutions. Other evidence which can be used includes:-

As we touched on above, it may also be relevant to bring the education facility into any legal action. If the school were slow to act, failed to act, or were aware of historic abuse allegations, they may be held partially responsible and liable for compensation.

While it could be said that the majority of the above signs in isolation could be judged part of “adolescence” it becomes more of an issue when they begin to accumulate. It may be difficult to encourage the victim to open up but it is essential that the truth comes out as soon as possible.

Different types of compensation for sexual abuse by a teacher

Potential compensation awards as a result of sexual abuse by a teacher can be fairly significant. It is also worth noting that while traditional compensation claims have to be pursued within the first three years of the accident/when the victim became aware of their injuries, this is not necessarily the case with sexual abuse.

As we know, many victims will only feel strong enough to report such actions years or even decades further down the line. Therefore, in this situation, the courts will likely be appreciative of the delicate nature of the issue and still engage with prosecutions outside of the traditional three-year time limit.

The subject of special damages relates to reimbursement of monies spent/lost and includes a whole range of issues such as:-

These lists are by no means exclusive but they do give you an idea of the various elements of compensation that could be included in your claim.

While certainly not the easiest subject to discuss, or even comprehend, sexual abuse by teachers does happen and action should be taken when suspicions are confirmed.

If you’ve been sexually abused by a teacher and would like advice on claiming compensation, you can call us free on 0800 652 1345 for expert advice from a solicitor.